About Us / They Don't Love You Back 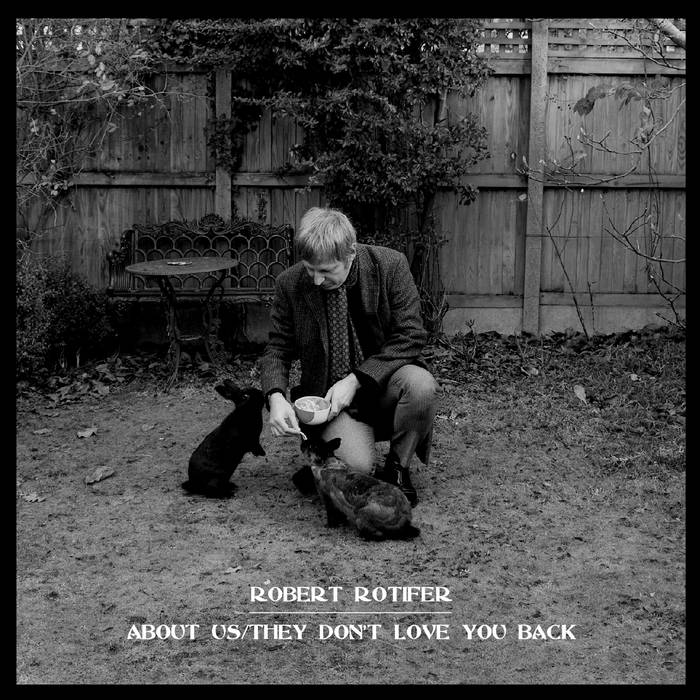 Amid the current run of albums and artists referencing or responding to Brexit and all it represents, Robert Rotifer is arguably one of the most uniquely qualified and relevant voices we need to hear. As a Viennese artist and journalist who's lived, worked and raised a family in London and Kent for the last two decades and more, he's understandably deeply affected by what's happening.
In 2017 he contributed to WIAIWYA's Seven at 77 series of releases with an epic, angry, personal and ultimately heart-wrenching song cycle summing up how he felt at that point - They Don't Love You Back.
Also that year, and not unrelatedly, he released a German language album called Uber Uns with the idea that he'd also eventually translate the songs into English.
Now, in 2019 and with the situation even more intense, Gare du Nord and WIAIWYA are joining forces to release a double CD comprising these two most recent and relevant projects:
The About Us CD features English translations of seven of the Uber Uns songs, plus an acoustic 19-minute medley of They Don't Love You Back.
The second CD has the full 77-minute original of They Don't Love You Back.
There will also be a vinyl LP version of About Us.

"We've been living with this mess for two-and-a-half years now. Three years if you include the run-up to the 2016 referendum.
I'm just one of those millions who moved from a European country to the UK, in my case from Austria over 22 years ago, lured by Britain's pop culture, the humour, the language. Like a lot of people in my
situation I've been through all the phases since the vote, from anger, grief, denial and disbelief to seeing the political reality as some kind of absurdist performance, albeit a rather repetitive one.
All through that time I was very lucky to be able to turn those feelings that would otherwise have eaten me up into records. The experience of Brexit made me write and record my first album in my native German (“Über Uns”, 2017, on the Viennese label Bader Molden Recordings) and, when John Jervis of WIAIWYA Records asked me to contribute to his limited series of 77 minute CDs, one long continuous suite of songs and instrumentals called “They Don't Love You Back” (2018).
Since “Über uns” came out I translated most of those German songs into English and played them at gigs in the UK, the US, France and Belgium. I've also found a way to boil down “They Don't Love You
Back” to a more stage-friendly 19 minutes medley, and it's been amazing to witness people's reactions to the material. Turns out I'm not the only one who's lost a lot of sleep over this whole shit show.
With the help of Ian Button, one November afternoon I eventually recorded this live set in my study at home in Canterbury. Just as I was about to release it under the title “About us” on our label Gare du
Nord Records, John Jervis approached me with the idea of giving “They Don't Love You Back” a proper release on WIAIWYA in time for the dreaded Brexit date at the end of March.
Thinking it over, it became apparent that those two records actually go together. And they really need to come out now.
Putting out a record is always selfish idea, based on the hubristic presumption that what you have to say is worth duplicating. But this feels different. It feels like me getting my word in.
After all, when they keep saying “the people have spoken”, they're not talking about people like me.
Along with hundreds of thousands of Brits in the EU, us immigrants were excluded from a decision that would affect us more immediately than those who got to vote.
A lot of those who did and were ignored, or with hindsight, may have felt misled, are now finding themselves in exactly the same place. So this isn't just about me. It's about us.

Yes, it seems we have lost.
All the things we thought forever won now appear to be gone.
But just you wait till the 2020s.
What's that coming round the bend?
As much as it wasn't forever we'd won.
After all's said and done you will see that it won't be forever we've lost.
Not forever lost."

The 24 track download version of this album is the digital version of the double CD About us/They Don't Love You Back, a joint release by Gare du Nord Records and WIAIWYA Records.

CD1 About us, also available as a single LP, is an all new solo acoustic album

CD2 They Don't Love You Back was originally released 7/7/18 by WIAIWYA as a one-track 77minutes album. This version has been sliced into 16 cuts to allow for nipping in and out, but the general idea of the song cycle is to listen to it in one go.
For a digest version there is track 8, the medley, which fills side B of the About Us vinyl release (Tracks 1-7 on side A of the LP)