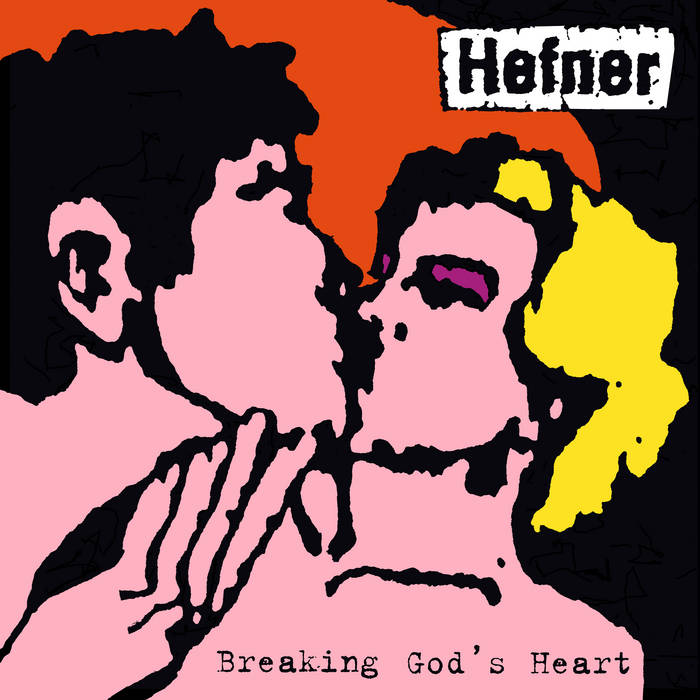 20 years ago, on 7th July 1998, the first Hefner LP was released, it garnered some great reviews, ensured the band were to become one of Peel’s favourites (they had 5 entries in 1999’s festive 50!), and cemented their reputation as Britain's largest small band.
NME - “truly independent, unassuming and painfully honest: the sound of thin, white indie dukes in spectacles.”
Melody Maker - “heart-skeweringly astute” combination of “grimly sweet lyrics and delicate, tentative tunes.”
Time Out - “awe-inspiring in their naked honesty”
More recently, the album was number 25 in Pitchfork’s 50 greatest Britpop albums, above A Northern Soul (Verve), Fuzzy Logic (Super Furry Animals), Vauxhall and I (Morrissey) and Tellin’ Stories (the Charlatans)
Breaking God’s Heart now gets the essential 20th anniversary vinyl re-issue, accompanied by some shows where Hefner frontman, Darren Hayman, will play the album in full

Here’s what Darren has to say about the record now:
Breaking God's Heart is an awkward, over confident start to my career. I have yet to get to grips with it again properly in preparation for these anniversary shows. It's so far away in my past that I have some difficulty in relating to the person who made it.
Mostly when I hear it I'm just amazed at the confidence, and possibly arrogance, I had then. I insisted on mostly first takes being used, vocals being recorded live in the room with the instruments, a ban on any reverbs or ambience being used. It was like I was trying to sabotage my career at the first hurdle.
Many of those decisions were based on half understood, interviews with my idols from the American Lo-Fi scene but I really didn't know what I was doing.
It does make a bizarre and caustic record though, and I know there are plenty of people who think this is my best work and I never got back to the blunt energy of these recordings.
I do see their point.

The Sweetness Lies Within
For a record that seems obsessed at times with sex and guilt the opening song is actually about a friend. There's lines about 'pretty necks' and stuff because I was a dick and felt that the song still had to be the stuff of rock music in someway. I like that this album and my career starts with a song about friendship.
The Sad Witch
I remember the day I wrote this. I think another two songs from this era came out on the same day, it was a rush. It sounds like it was written in a rush. The lyrics are chosen for their sounds and everything collides together and nothing really makes much sense. It's just a confused ball of sexual tension, and maybe there's some sort of love song or song of desire in there.
I am very proud of the chorus though, a chord sequence in the key of C which never uses the root chord.
I wonder if my album later on, The Violence, that dealt with the 17th Century witch trials, and was researched thoroughly had anything to do with this gibberish.
A Hymn For the Postal Service
I was so addicted writing letters in my 20s. Lots of friendships were born through it. The song is about how someone could be so different in their writing to how they are in real life. I was trying to make characters that all sort of occupied the same space. Slightly exhausted, lived in souls that didn't conform to the usual notions of wistful, indie, ennui.
I met someone briefly called Velda Pond that Lydia Pond took her name from, I wish I hadn't changed it.
Love Will Destroy Us In The End
Similar to the above, I was imagining this group of people, that were some kind of exaggeration of me and my group of friends. Young people feel they're the first to do anything, and they also feel so world, weary and tired. There is a sharpness to those feelings in our relative youth though. The song is actually trying to say, don't worry, it will be ok.
The Librarian
And once again, a sort of huge statement of love from someone who believes that no-one could love like they do. I am poking fun at it in this case I knew that the main character was a fool and misguided, possibly a little creepy too. We know the librarian never gives him another thought.
God is on My Side
Before Hefner allowed me to be a full time musician I worked for about five years for the National Blood Transfusion centre. I would be collecting blood in church halls and a lot of lyrics came out of being surrounded by this religiosity. It seemed like a good way to communicate guilt in relation to sex, because for what ever reason I guess I did feel guilty about those things even though, then as now, I was an atheist.
I guess this is supposed to be some sort of Hubert Selby type character. Once again, I'm surprised at having the front to present this character and idea without some kind of better explanation. I wanted the record to be slightly shocking.


Another Better Friend
As our first single this was called 'A Better Friend' for some reason I felt a song couldn't be released and two different versions so had to have a different title when recorded.
I think this is the best song on the record, despite all the sharp language I think it's the sweetest of songs. It's saying 'I know we're both shit, but I am here for you.'
Love Inside the Stud Farm
A love song, I was trying to write about someone rendering you speechless. The moment where almost all you can say is 'you, just you.'
Tactile
An absolutely brutal song. It's about the most desperate one night stand. People used to like it a lot. I'd been playing piano for about a week before recording this.
Eloping
I like this song a lot and feel like it has no place on the record, it seems to represent something more ambitious in it's lyric and rythmn that took me a few years to get back to. I seem to remember thinking it was inspired in some way by Liz Phair but I can't really remember in what way now. I return to this theme of a song being about a release or an escape a lot in my work.

Hefner's is a bedsit world of spindly guitar and towering passions; of skewwhiff ideals and surprisingly smooth melodic surges; of awkward outbursts and slow-burning lo-fi for lovers… 'Breaking God's Heart' is all about sparkling melodies, twinkly-eyed poetry, intimate confessions, a thrillion knowing references to sex, soul and sadness and the sort of chipper attitude that says: 'This is a record you will relish for years to come'. So save yourself time, start treasuring it now.
8/10
Simon Williams – NME

Hefner are running on the same rock-not-rock fuel as early Violent Femmes or The Modern Lovers, and like those groups are expert at building emotionally charged arrangements by adding or subtracting at precisely the right time.
8/10
Patrick McNally – Drowned In Sound

Hefner driving force Darren Hayman describes his debut album as a baby photograph you pray your mother won’t show to a new partner. Well, he can squirm if he likes, but Breaking God’s Heart sounds like Jonathan Richman colliding with Galaxie 500, and is a twinkling star in the lo-fi firmament.
Jono Scott – Record Collector