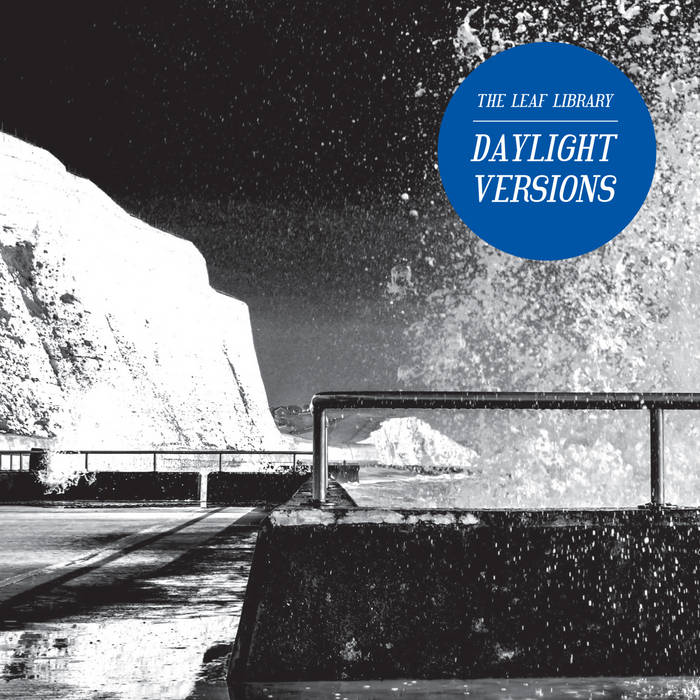 Daylight Versions is the debut full-length album from London quintet The Leaf Library, due out on 30 October via wiaiwya. The record is full of wonderfully woozy, drone-pop tunes about meteorology, the seasons and the incoming sea; from songs about the ghostly Suffolk coastline to the slowly rising waters of London marshes, these ten tracks channel the warm fuzz of Yo La Tengo, the spacious repetition of Talk Talk and Movietone’s seaside melancholy to beautiful effect.

Musically, the album is a shift away from the Stereolab and Electrelane influenced buzz and drone of the band’s previous singles. Aside from the propulsivenss of opening track “Asleep Between Stations”, the album has a more contemplative, nocturnal feel, with songs that gradually unfurl, with more horns, strings and pianos brought into the mix. This coupled with waves of synths and drones give the album a drifting, tidal feel throughout.

In order to capture an expansive feel, and to make the most of music connections, The Leaf Library brought in a whole load of friends and collaborators. The record features a plethora of guest talent including Steven James Adams, Rob Smoughton from Hot Chip, Alison Cotton and Mark Nicholas from The Left Outsides, Daniel Fordham and David Stewart from The Drink, as well as Alasdair Maclean from The Clientele and Amor de Dias. The guests were given minimal direction, and instead left to play as spontaneously as possibly, encouraging chance and serendipity. Unplanned elements such as the horns on taster track “Rings of Saturn” and the weather storm of drums that closes the album on “Evening Gathers” give the record an untethered and unconfined atmosphere.

Lyrically Daylight Versions moves away from cities and buildings of their early work and towards the outdoors, the coast, the weather and the sea, with recurring themes of water and flooding (“Acre”, “Sailing Day”, “Pushing/Swmming”), as well as the seasons (“Tilting”, “Slow Spring”, “Summer Moon”). Much of the album was inspired by visits to Suffolk and The Lake District, viewed through the prism of literary influences such as Rings of Saturn by WG Sebald, a travelogue of Norfolk and Suffolk full of weird and wonderful digressions, as well as The Old Ways by Robert Macfarlane, a lyrical and poetic book on old paths and routes around England and Scotland.

As well as the aforementioned Talk Talk and Movietone, the band looked towards other musical inspirations, covering the wall above the studio mixing desk with pictures of Broadcast, Brian Eno and Conny Plank as well as a photo of Nick Cave in his writing room, along with postcards from Dunwich and Aldeburgh in Suffolk. Guitarist and songwriter Matt Ashton says, “We hoped that some of their magic might rub off on the album a bit, plus it was something nice to look at whilst stuck deep in mixing a record at 1 o’clock in the morning”.

The Leaf Library started out in Reading after Matt’s previous band (John Peel favourites) Saloon split in 2004. He started writing and recording with vocalist Kate Gibson and after moving to London, they were joined by bassist Gareth Jones (from Wintergreen) and guitarist Ben Smith, Matt’s housemate at the time. After a couple of temporary drummers, Lewis Young settled in for good, bringing with him an eclectic collection of synths and gadgets. Matt also played with Steven James Adams in Singing Adams, who released two albums – ‘Everybody Friends Now’ (2011) and ‘Moves’ (2012).

They released their first single Losing Places in 2008 via the Dutch label The Hooter Listens (which included a remix by Isan), followed by a second single on the French label Beko in 2010. In 2011 they released Different Activities, Similar Diversions, a compilation of various tracks and home recording experiments. 2014’s The Greater Good (part of the WIAIWYA singles club) gained heavy play on BBC 6music, and was followed by another 7”, Walking Backwards for the label in 2015.

The Leaf Library have produced an album full of uneasy beauty. Graceful yet grandiose, Daylight Versions captures the feeling of living amongst England’s eccentric weather, of being on a small island floating in the North Sea, as it slowly disappears beneath the waves.