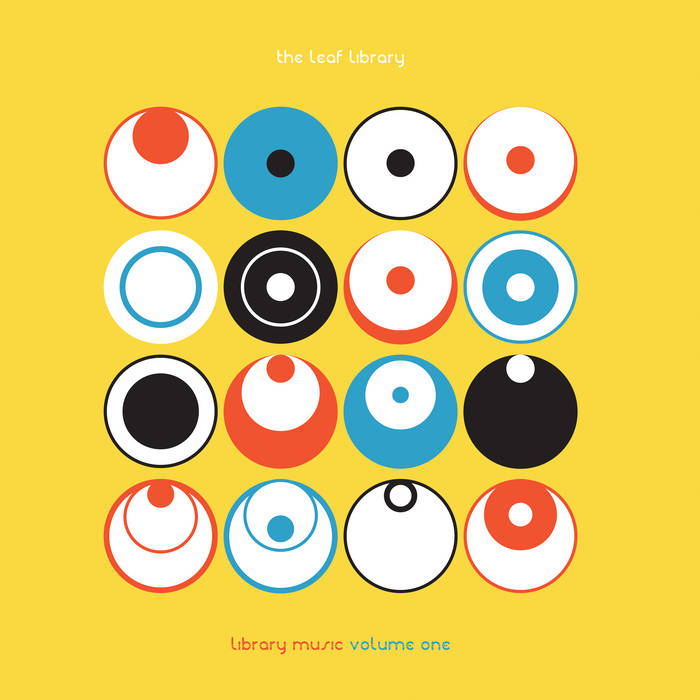 "It's like autumn mornings strolling through empty parks, underneath blank newsprint skies like you used to get in Spot The Ball contests & everything feels like a 70s public information film." - Pete Paphides

" record that captures the group’s essence and character, in all its guises. Is this a ‘best of The Leaf Library’ album? No, but it might just be my favourite." - God Is In The TV

Library Music: Volume One is a sixteen track double LP documenting the North London drone pop band’s 7” singles, one-offs and compilation tracks spanning the first 14 years of the group’s existence. It includes synth pop, indie fuzz and moody motorik workouts, alongside pastoral folk sketches, dubby electronics and the occasional drone experiment. More immediate than their stretched out and slow-burning recent album tracks, the music here is taken from limited vinyl releases, album bonus tracks and music for compilations on labels as diverse as Bezirk Tapes, Second Language, Modern Aviation, and Concrete Tapes as well as the band’s home for the last seven years, Where It’s At Is Where You Are.

The compilation is a happily cohesive record of an inventive band that rarely stands still for long. The group says, “We wanted to gather all our early, scattered work before we move on to our next album, to remind ourselves (and others) of some of the poppier and less characteristic things we’ve done. We’ve always felt a lot more relaxed and freer making one off things for people – it’s a chance to try things that might otherwise be daunting on a full record.

“We have been introduced to loads of bands that we love initially through non-album compilations – Broadcast, The Chills, Stereolab, Piano Magic, Flying Saucer Attack amongst others – we wanted to add our own to that (admittedly slightly daunting) lineage.”

Always a prolific group this is by no means an exhaustive collection, the title giving a clue to how much more they have left to share.

The Leaf Library are formed around the core group of singer Kate Gibson, former Saloon and Singing Adams guitarist Matt Ashton, guitarist SJ Nelson, drummer Lewis Young and bass player Gareth Jones. They have released three studio albums (Daylight Versions, About Minerals and The World Is A Bell) as well a number of electronic and experimental albums and EPs, remix compilations and long form tracks. They have also released five Monument CDRs; an on-going series of experimental solo and side projects on their Objects Forever imprint (full band discography at theleaflibrary.com).

The band have collaborated with musicians as diverse as Alasdair MacLean of The Clientele, singer Ed Dowie, noise group Far Rainbow and string collective Iskra Strings, and have provided music for a number of exhibitions, films and performances. A collaborative album with Japanese artist Teruyuki Kurihara is due in late 2022 on the Mille Plateaux label.

An active live group, the more delicate sound world of their records is replaced by a much noisier and intense experience, assisted by the addition of vocalist/percussionist Melinda Bronstein, saxophonist Daniel Fordham (The Drink, Steven Adams and the French Drops) and flugelhorn player Laura Copsey of fellow drone pop travellers Firestations.

Thanks to Mark Cremins, Where It’s At Is Where You Are, Modern Aviation, Second Language, Concrete Tapes, Kingfisher Bluez, Bezirk Tapes and Cowp for originally releasing this music. Thanks, as ever, to John Jervis for the support and encouragement