A Girl And A Gun : Lockdown 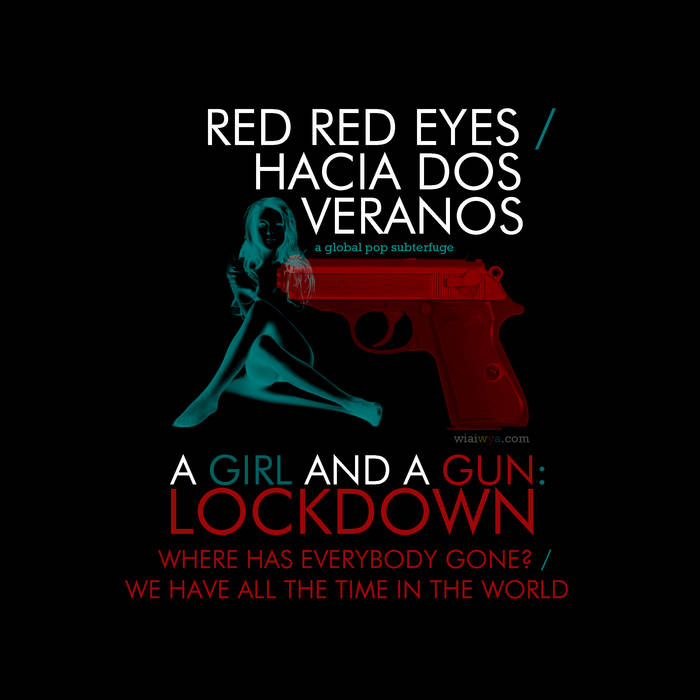 These are unprecedented times

Sometimes it feels like some evil mastermind, hell bent on world domination has - well, you know - just like a Bond film. The streets, pubs, venues and stadiums are empty, every day seems to last at least 28 hours, and we have no idea how long it will go on…

And so, the time is right for a couple of new Bond cover versions - Where Has Everybody Gone?(originally recorded by the Pretenders in 1987 for Timothy Dalton’s first stab at the role in The Living Daylights) and We Have All The Time In The World (the 1969 Louis Armstrong classic, recorded for George Lazenby’s only outing as Bond in On Her Majesty's Secret Service ) released on the day the 25th Bond film, No Time To Die, was originally scheduled to hit the screens

Where Has Everybody Gone? – Red Red Eyes

UK duo Red Red Eyes released their debut long player in 2018. The album is packed with cinematic drones and intricate twangs; a stylish shoegaze noir, or a Broadcast / Morricone / Gainsbourg soundtrack to an episode of Black Mirror.

Red Red Eyes are Laura McMahon and Xavier Watkins. While playing together in psychedelic outfit Violet Woods, they started working on McMahon’s songs, evoking the atmospheres of their shared cinematographic interests. The result is often dark and hypnotic, with McMahon’s (Betty & the Werewolves) soft vocals being echoed by Watkins’ (Fuzzy Lights) delicate guitar. Their first tape was released on Cambridge’s Meadows records on July 14, 2017. Horology was completed later in the year, and was quickly snapped up by London’s wiaiwya records (home of the Leaf Library, Freschard, the Great Electric and many many more).

If you like the idea of Tracey Thorn fronting the Banshees, Insides at their dreamiest, Pale Saints at their droniest, Lush at their spookiest, or Strawberry Switchblade at their most melancholy, then Red Red Eyes will be the band for you!

We Have All The Time In The World – Hacia Dos Veranos

Hacia Dos Veranos (Towards Two Summers in English) is an Argentinian post-rock band born in 2005 as a project of two friends who moved to Buenos Aires to study. So far they have released three albums.
'De los valles y volcanes' (Of Valleys and Volcanoes), released in 2007 to critical acclaim in Argentina and Spain, led to a deal with Warners. Tired of Warners dragging their feet over releasing their second album, 'Hacia Dos Veranos', they released it as a free download in 2010, to excellent reviews and plays from Gideon Coe on 6Music. Their third album, Limay, was released in the UK by Hangover Lounge records in 2013 (“there is no singer, there are distorted bits, and fast drums too. it's not jazz, it's too melodic and accessible to get Arts Council funding or be album of the year in Wire. It's the sound of Love's Forever Changes, crashing into the rich pop majesty of Nick Drake's Bryter Layter. Beautifully. In Argentina. Without words”).

Their music has been included in compilations from Argentina, Mexico, Brazil, Italy and the UK, and in Martín Piroyansky's award-winning film 'No me ama' (She doesn't love me). The band's name is based on the book Tropic of Cancer by Henry Miller and as they themselves say: "As (the summer) is the season that brings memories, go to two summers is like going in search of happiness ".

Hacia Dos Veranos remain the world's most enigmatic and charismatic band, and this is the first recording where they sing