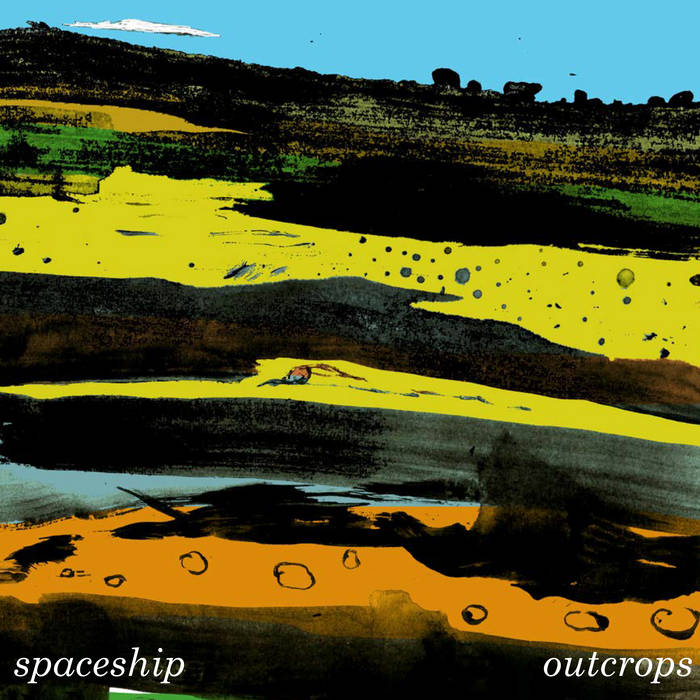 MDonaldson (8sided.blog) Music with a sense of territory, figuratively and — it seems from the description — literally. Layers of tones float and stream, as often in harmony as in calm, below-the-surface tension. The effect is pensive and a warm reassurance. A ticket for closed-eyes travel even for those remaining still. Favorite track: Orchan Rocks (Ocean).

If you are yet to hear Spaceship, think Kevin Shields lending Tangerine Dream a hand on the soundtrack to a late night BBC2 Open University geology broadcast (or a Radiophonic Workshop/ Mica Levi/ Vangelis supergroup playing on the vidscreen as Deckard and Rachael drive off into the countryside).

Spaceship is Mark Williamson, a musician and sound artist based in West Yorkshire working with field recordings, portable synthesizers and found sounds. He has previously released albums, digitally and on CD, through Apollolaan, Forged River Recordings, The Dark Outside and wiaiwya, and has contributed to compilations for A Year in the Country, Linear Obsessional and Woodford Halse. Williamson has also worked with Luke Turner of the Quietus, providing field recordings to accompany readings from his book ‘Out of the Woods’. Williamson’s compositions have featured as part of Cities and Memories’ The Next Station and Sacred Spaces projects. Spaceship's vinyl debut, 'Outcrops' is released by wiaiwya on 24th May.

Focussing on a series of sandstone outcrops above the West Yorkshire town of Todmorden, Outcrops is an exploration of the geological history of the Upper Calder Valley and Cliviger Gorge. Revitalising an enthusiasm for geology that saw Williamson complete an undergraduate degree in Earth Science in the 1990s, each track was created to invoke a particular phase of that history, namely the interbedded sandstones and siltstones of the Millstone Grit, the formation of the Yorkshire coal measures and finally the glaciation of the valley during the last ice age.

The album was recorded in the field, in a series of small caves where Williamson created the pieces that make up the album whilst almost encased within the landscape he was describing. These recordings were then treated to minimal editing and post production in Williamson’s home studio at the base of the hills where the recordings were made. In this way the album becomes analogous to many of the local stone buildings, the materials from which they were built often having travelled just a few hundred yards to the site of the building’s final construction.

Finally, whereas last year’s The Last Days (The Dark Outside Recordings) was about Williamson leaving his Essex home of the last twelve years, Outcrops is about the discovery of somewhere new.

“emotive expressionism of maudlin fugues and bittersweet folk melodies” – the Wire
“a lovely set of ... modern pastoral pieces” – Electronic Sound
“spectral drones augmented with simple piano and synth, recalling Eno and Boards of Canada at their most minimal” – Shindig
“he lugs harmonium, guitar, zither, bells and even a battery powered synth or two to his various locales, where he delights in the songs of sparrows, finches and warblers that greet him” – the Wire

Field Notes will be 128 full colour pages of paintings and words; a beautifully designed and bound hardback printed on art paper"